Two weeks in ice and cold

Shipbuilder from TU Hamburg collects data at the North Pole

"The Arctic is an inhospitable, harsh region," says Dr. Franz von Bock und Polach of Hamburg University of Technology about his time aboard the polar ship "Le Commandant Charcot." His two-week research voyage with scientists∗ from Germany, France, Canada and the USA to the North Pole began from Spitsbergen. At temperatures as low as minus 15 degrees, 24 hours of daylight and constant wind, the team, together with the Alfred Wegener Institute, conducted series of measurements on ship speed, propulsion power, temperature of the outer hull, ice thickness and light reflection from the ice. During the voyage, they also sighted whales, polar bears and walruses.

Optimizing ships against stresses
In addition to continuous measurements of ice thickness, the ship design expert tracked the vertical movements of the ship in the ice. He plans to model these in a second step at the TU Hamburg. The interior of the ship's hull was also part of the investigations: Von Bock and Polach and the team fitted it with sensors to be able to establish long-term correlations between the different temperatures at different points on the hull. "Based on the measured values, we want to gain new insights into the extent to which temperatures and large temperature fluctuations stress the structure of ships. There has hardly been any scientific work on this to date," explains the TU researcher. His goal and that of his colleagues is to better adapt ships' hulls to their environment in the long term and thus make them safer and more environmentally friendly through optimized structures.

Research under extreme conditions
While sailing through the ice, the expedition ship passed through ice layers of up to two meters and beyond. "If the weather was good, we went out on the ice and deployed snow buoys for continuous measurements. In foggy conditions, this was too dangerous for fear of polar bears," the TU expert describes the conditions on site. "My personal highlight was when we were directly at the North Pole at 90° North. But despite all the breathtaking impressions, the consequences of climate change also became apparent during our research trip. There were phases where I saw no more ice near the North Pole all the way to the horizon. This made both me and the experienced guides on board very thoughtful." 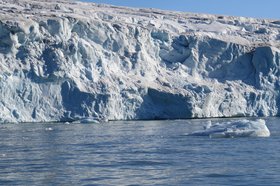 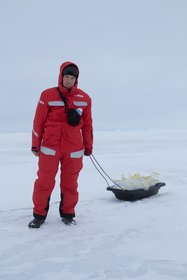