Sensors that can decide for themselves

Ulf Kulau is a new professor at the TU Hamburg

Actually, Ulf Kulau would have liked to become a pilot, but his eyes were too bad for this career path. Fortunately, he has fulfilled wish number two and makes "cool stuff with sensors" that are used in agriculture, space travel or medicine. "Sensors and sensor networks have always fascinated me because they are an interface between the real and digital worlds," the junior professor explains. Smart sensors can couple measured data with signal and data processing. They enable a fusion between sensor technology and computer science. This can be used in agriculture, for example, where sensors are first used to measure leaf temperature, soil temperature, and air and soil moisture. The sensor becomes "smart" in that the data is not simply forwarded to a backend, it is preprocessed directly on the sensor. This would allow a "drought stress index" caused by a lack of water to be calculated, using embedded artificial intelligence to evaluate the measured data over time and make a decision on the sensor system to take action (more water). "As an aside, such sensors should ideally be energy-autonomous. The energy efficiency of such small embedded systems is another core topic of my research," adds the computer scientist.

After studying computer science and writing his dissertation at the Technical University of Braunschweig, Kulau joined DSI Aerospace Technologie in Bremen, working on research projects for space electronics. He developed the sensors for a smart shirt worn by German astronaut Matthias Maurer during his current mission on the International Space Station (ISS). It measures minimal chest movements triggered by the heartbeat. The data obtained in space is then sent to Earth and expanded for further research. Considering that 44 percent of all deaths in Germany are due to cardiovascular disease, these are certainly the kinds of applications that led Ulf Kulau to choose his career.

The TU Hamburg as a "smaller" university with "short official channels" appeals to the scientist, as does the prospect of broadening his working group in the future. In order to offer energy efficiency and interdisciplinary formats in addition to the topics of classic sensors, where the focus is on applications, he is still looking for committed collaborators. A tight schedule that leaves Kulau little time for his private project: becoming a hobby farmer. He currently shares an old remnant farm with 40 chickens, rabbits, dog and cat with his family. His wish: "Perhaps a few Galloway cattle will be added at some point". 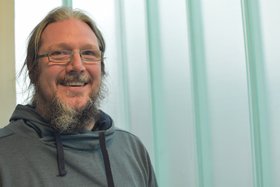