Kay Smarsly is a new professor at TU Hamburg

Digitalization is everywhere and hardly limited to voice-controlled TVs or self-driving cars. The construction of high-rise buildings can also be optimized through digitalization. “Just a few years ago, it would have been considered impossible to print concrete. Today, we can build entire houses using 3D printing," says Kay Smarsly. Since March 1, 2021, he is a professor and director of the new Institute of Digital and Autonomous Construction (IDAC) at TU Hamburg, working on future infrastructure. "My research ideas are motivated by facilitating societal wellbeing and protecting our environment."

For example, Professor Smarsly's research focuses on concreting printing, artificial intelligence (AI), and intelligent sensors used to monitor bridges, dams, high-rise buildings, and other infrastructure. He and his team are currently working on intelligent robotic dogs able to monitor buildings and to communicate with each other. Applying laser scanners and other sensors, the robots collect measurement data from buildings, analyze it autonomously using AI techniques, and forward it to remote computer systems. "The robots can independently find their way in and around buildings and, while conducting visual inspections, look somewhat like roaming dogs," explains the TU professor. As soon as they detect abnormal features, such as unusual cracks, a human operator will digitally be informed. This concept not only renders construction work easier, but also advances the safety of buildings.

A number of other topics, such as the environment and climate change, are also part of Kay Smarsly's research portfolio. The intelligent sensors he has developed can detect not only damage in buildings, but also soil pollutants. As a result, the drinking water quality can be tested easily at any time and any place in a cost-effective manner. "In the long term, we would like to use this technology in developing countries," says Smarsly.

The versatility his research fields entail fascinates the TU researcher: "The digital transformation enables me to implement future visions and to work in an interdisciplinary way." However, while studying civil engineering, he never aimed at pursuing a scientific career. "'Ett kütt wie et kütt' – as they say in my homeland, Rhineland." Before joining TU Hamburg, Smarsly was a professor and chair holder at Bauhaus University Weimar.

For further information, please visit the website of the Institute of Digital and Autonomous Construction at www.tuhh.de/alt/idac. 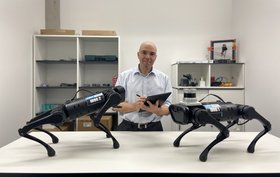